Go out, explore and discover some of Ohio's caves.

As I walk down the staircase to the entrance of Ohio’s largest cave at the Ohio Caverns, my mind shifts between two trains of thought. First, I wonder what it must have been like for the farmer who accidentally discovered this massive and elaborate cave system below the land that he was tending in 1887 in rural Ohio. I ponder the amazement and confusion he must have felt uncovering this complex cave network that remains one of Ohio’s most stunning natural resources.

My second train of thought shifts to my own exciting moment of discovery. I wonder what I can expect when I cross through the small entrance into the winding and narrow cave that remains a consistent 54-degrees year-round.

The Ohio Caverns is just the beginning of some of the 400 caves in Ohio that are made up of elaborate tunnel networks below ground. Many of the caves are inaccessible to the public, but there are few that you can explore to get a glimpse of the fascinating underworld of stalactites, stalagmites and minerals that have crystallized over thousands of years.

Exploring some of Ohio’s exciting natural resources within the cave systems requires no previous experience and all of the caves that are open to the public offer trained guides to lead the way. If you have ever wanted to feel like a true explorer, check out these unique caving opportunities in Ohio. The Rock House in the Hocking Hills region is actually a wide arch but considered a cave with a 25-foot high ceiling. It is one of the coolest adventures to seek out in the Hocking Hills region and a bit different from the other caves in Ohio. The half-mile trail takes about 45 minutes. At the Rock House you will see a cliff with windows and experience the cave system that Native Americans who lived in the region once used. The tunnel at the Rock House is 200-feet long and 40-feet wide.

Not quite ready to take the cave plunge? Start out at Old Man’s Cave and Ash Cave in the Hocking Hills State Park where you can explore the complex of grottoes, gorges and overhangs on your own. Many of the caves mentioned above are open year-round for tours, but check online for daily times and tour schedules. Ohio’s largest cave system at Ohio Caverns in West Liberty, Ohio has nearly two miles of narrow passageways bordered by damp rocks that occasionally open to wide chambers and underground streams. The guide’s small light illuminates the stalagmites and stalactites as we navigate what is otherwise pitch darkness.

The varying depths of the cave range from 30-feet below ground to 103-feet at its deepest point. Every step reveals something incredible from the ancient “graffiti” on the limestone walls with inscriptions by young explorers to the occasional drip of water on my head that is filtered through the cave system. There are large and small caverns and colorful mineral formations in vibrant shades of orange and brown that design sections of the passageways. The crystals come in every size and formation culminating with the Crystal King, a five-foot-long, 400-pound stalactite that is more than 200,000 years old. 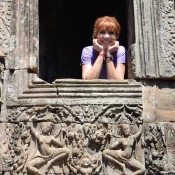 READ MORE
Ohio Natural Wonders You Have to See to Believe READ MORE
12 Ohio Castles You Need to Visit This Winter