Bill and Jim are famous friends in the Dayton and Centerville area, and their donut shops are less seething battlegrounds and more sugar havens. Bill’s donut shop, since 1960, came first, but both shops retain the character of old Americana through humble pricing and classic recipes.

The rivalry is now stirred up more among the customers than the new owners of the shops themselves. Legend goes that Jim’s Donut Shop was supposed to be a second Bill’s, but Bill lost the deed to Jim in a game of poker, and they’ve been “rivals” ever since.

Both restaurants hone that doo-wop-diner feel — wood and orange detailing marking the era in which they were born. At Jim’s, you can see a donut chef slinging dough from bin to hot oil, and finally into clear sugar glaze for their original glazed. Right now, you can get their crunchy Fruity Pebbles donut, but maybe next week it’ll be Peanut Butter and Jelly, or next month it’ll be iconic dinner-plate sized Apple Fritter.

Locals are always excited to chat, especially if you’re strategically taking photos of donuts outside the shop. “What a beautiful donut, eh? Right piece of art,” they say. If you’re one to cherish donuts, the Jim’s community will welcome you with open arms.

At Bill’s the bigger space buzzes with activity. Donuts are brightly lit in counter glass-top cases and behind the servers in glass shelves. Take your pick before they run out, but don’t worry, donut chefs will wizz past with freshly made batches. You can always get their delicately fried Butter Twist, or shop their pretzel donut, voted one of America’s best and their cake red velvet and coconut donuts.

Mind you don’t take too long choosing or local long-time patron, Irene, will make the choice for you. “Get the Cherry one! It’s my favorite!” she says, grinning ear to ear. Grab a commemorative Bill’s Donut Shop t-shirt to remember old Irene by.

Go to both and grab yourself a donut, or a few – they’re only pennies on the dollar. Bill’s and Jim’s are worth the trip, and your stomach can decide the winner of Ohio’s most delicious turf war.

For more Ohio bites, Find It Here at Ohio.org. 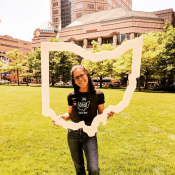