History and Eats at Cleveland’s West Side Market

Sitting proudly on the corner of West 25th Street and Lorain Avenue in Ohio City, the West Side Market is Cleveland’s oldest public market. The market is home to 100 vendors offering everything from meats to produce to baked goods to dairy to spices and nuts. The market’s history is enough to prompt a visit – but the food of course is the reason to keep coming back.

In 28 years of living in northeast Ohio, I had never visited the West Side Market. Shame on me, I know. So for my first visit, I decided to book a market food tour with Taste Cleveland Food Tours.

I met my tour guide and a few other tourmates across the street from the market in Market Square Park – where the old Pearl Street Market used to sit. From here, our guide told us about the construction of the market building, 137-foot clock tower, and produce arcade – it took more than 10 years to complete and cost more than $730,000 (a HUGE sum back at the turn of the 20th century). Then it was time to go inside. Luckily for us, it was a cold, snowy Friday morning and so the market was quieter than usual. Lots of people shop here – from families stopping by to buy some fresh meat for dinner to local restaurants who purchase all their pasta from market vendors – and it can get crowded.

Our two-hour market tour took us to about a dozen different vendors, some of which have been in the market for generations. We started off with juice at Juice Garden, who get most of their fresh ingredients from right inside the market. The tour also had us trying apple fritters at K&K Bakery, butter at Irene Dever, stuffed olives at Rita’s, and three different cheeses at The Cheese Shop. There was also falafel, honey, dried veggie chips, and a mango-cactus-jicama salad.

My favorite stop was at Czuchraj Meats, where we had beef jerky named by Iron Chef Michael Symon as one of his favorite things he’s ever eaten.

Throughout the tour, our guide pointed out stalls that have been in the market for generations (there are at least one or two that have been around since it opened in 1912), and pointed out some of the architectural details that make the market special (like the Guastavino tile vaulted ceiling — you’ll find almost the exact same one at Grand Central in New York City).

If you haven’t been to the West Side Market before (or if you don’t know much about the market’s history), I highly recommend signing up for one the next time you have a free afternoon in Cleveland.

Essential info: You can book this tour at Taste Cleveland Food Tours. Tours run on Wednesdays and Fridays year-round and begin at 11:30 a.m. Tour cost is $42 per person and includes enough food to fill you up for lunch. There’s free parking in the lot located behind the market.

About the Author
Amanda Williams 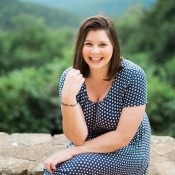