Perry's Victory and International Peace Memorial is a great place to see all the Lake Erie islands at once, and soak up American history.

From the moment you climb aboard one of the Miller Ferry’s bright blue and white vessels, you will see it rising in the distance.  At the top of the ferry ramp on South Bass Island, you’ll be closer, but not quite there.  Hop on one of E’s Golf Carts, decked out with American flags, and you’ll be on the lawn staring up in about five minutes.

Perry’s Victory and International Peace Memorial commemorates the lasting peace between the U.S., England and Canada – nations once at war.  And it’s pretty cool, too.  Just ask 11-year-old Shane McKenzie, visiting the site last week with his dad, Doug, from the Akron area.

“It’s really awesome, the view is just amazing,” he exclaims.

Doug jokes that they wanted to take the steps, all 427 of them, instead of the elevator.

When asked if he’d ever been atop anything this tall, Shane thought for a moment and pointed across Lake Erie to a very distant Cedar Point. “The Dragster,” he says, smiling.

But even if Cedar Point has something taller, this historic site still has the world’s tallest Doric column.  Constructed of granite blocks, it’s 27 feet taller than the Statue of Liberty.  Construction began in 1912 and finished three years later.

And if you have questions, just ask one of the ranger staff like Bill Krejci, an avid historian who’s working on several personal projects.  But while on the job, he’s all work.  From discussing the fates of the many soldiers killed and wounded during the Battle of Lake Erie to pointing out landmarks from the observation deck, he knows all the facts.

While the monument wasn’t crowded last week, it will be soon.

“By Fourth of July we’ll be overflowing and have a line out the door and down the steps,” he explains.

On the top deck: Ooohs and aaahs and plenty of staring off into the wide blue yonder.

“Which is Green Island?  Is that Canada?  Where is Middle Bass?  Where is Kelleys Island?”

The name-that-island game is continuous entertainment for visitors.  But while the view is spectacular, don’t forget to look down at the visitors center.  And then go.

Ranger Lisa Meade said the two most popular attractions are a 15-minute film, presented in a movie theater, and a massive diorama depicting the battle and its many ships.

The center is essentially a museum, featuring original artifacts from ships including pieces of hull, weapons and cannons and other interesting items.  Informative displays about the building of the monument and early American history are easy to understand.

One weekend a month visitors can watch history come alive as rangers participate in shooting demonstrations on the lawn, including cannons. 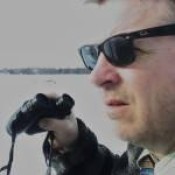